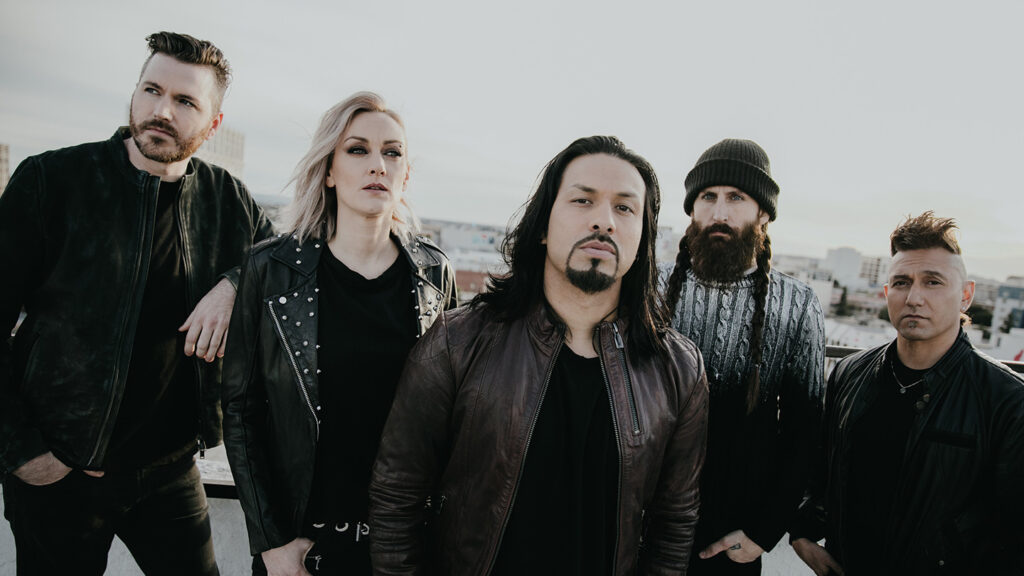 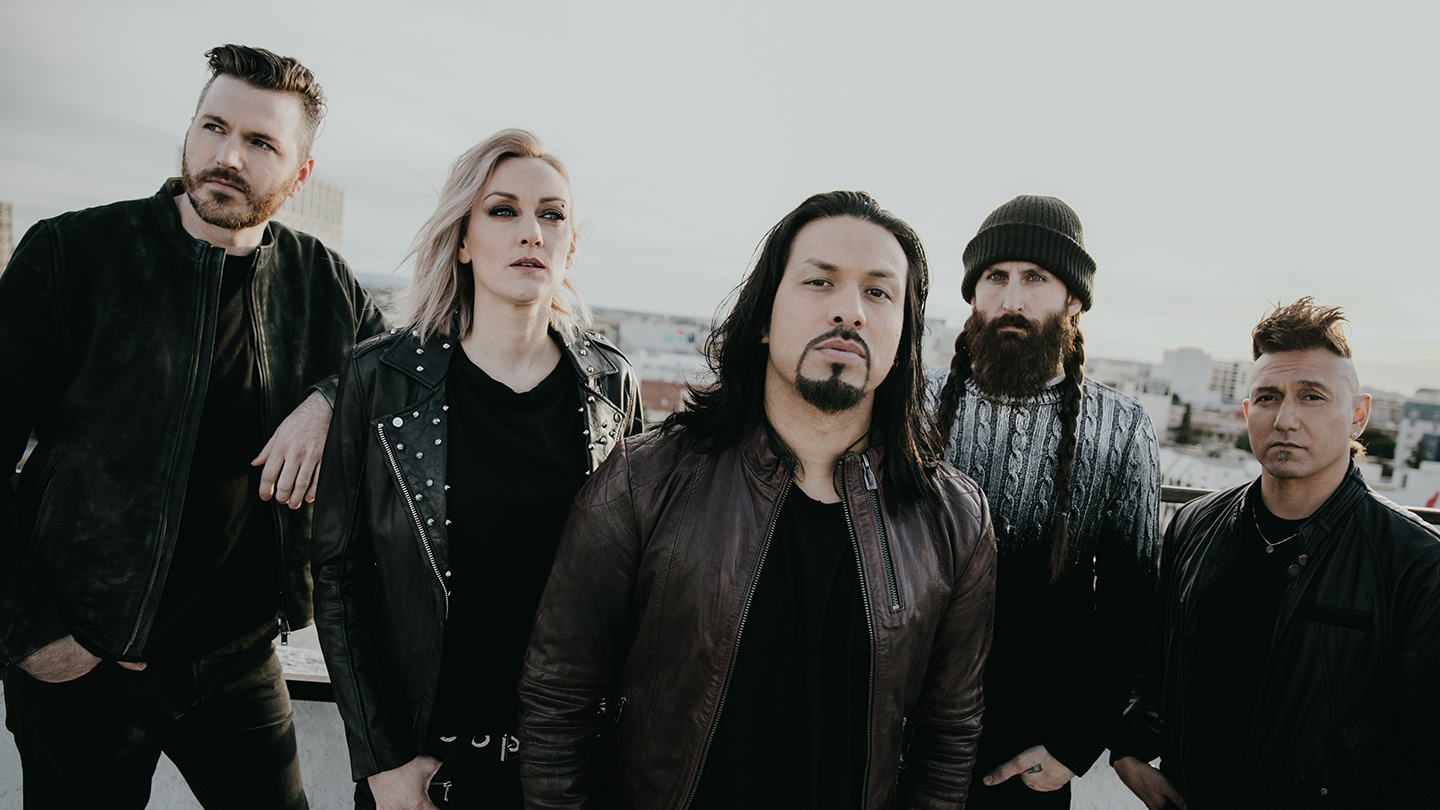 POP EVIL is the bridge between life-affirming hard rock hit-making and the burgeoning new frontier of genre-bending postmodern playlists. A crowd-pleasing band unafraid to embrace the heaviest and most melodic ends of the spectrum, with a seemingly endless stream of No. 1 hits veering between fist-pumping anthems and timeless power ballads. POP EVIL delivers their most ambitious rebirth yet with a jaw-dropping sixth album.

“Let the Chaos Reign” and “Work” arrive as a twin assault of invigorating readymade hits for 2020, from an album filled to the brim with a dozen tracks each worthy of a dedicated spotlight. “Let the Chaos Reign” is the heaviest single the band has ever dropped, a rousing fight song of self-determination and rising to meet any challenge with courage and strength. By contrast, “Work” puts its heavy guitars atop grooving rhythmic punch and EDM flourishes, as it champions the working-class heroes struggling to persevere across all industries today.

“We won’t bore people with the same song over and over,” assures charismatic frontman and bandleader Leigh Kakaty, who co-founded the band in Michigan. “When you come to our live show, we feel like there should be an ebb and flow, peaks and valleys, that are similar to real life. Sometimes you’re up, sometimes you’re down. We like to take people on a journey when they listen to our music or come to see us live.”

Pop Evil has been a staple at major festivals and in theaters and clubs for nearly two decades, despite the group’s relative youth. As they’ve ruled the roost with No. 1 Billboard Rock singles like “Trenches”, “Deal with the Devil”, “Torn to Pieces”, “Footsteps”, and “Waking Lions”, they’ve taken their inspired message to the people, on tours with modern rock titans and veteran acts alike.

On their go-for-broke sixth album, the group doubles down on the yin-and-yang at the heart of their sound. There’s no other band that bounces between a song like “Waking Lions” and “A Crime to Remember” or “100 in a 55” so effectively and with such overwhelming success.

How are Kakaty, longtime guitarists Dave Grahs and Nick Fuelling, bassist Matt DiRiot, and powerhouse drummer Hayley Cramer able to flip the spectrum so seamlessly? “If my voice sounds good on it, the hook is catchy and memorable with a single listen, and it will go over well live, we’re not afraid to draw from any genre that we see fit for inspiration,” says Leigh.

Even for a Pop Evil record, that contrast and fearless genre-defying cross-cultural pollination have never been stronger than on album number six. The preproduction process yielded close to 30 songs, whittled down to the most potent 12 that represent everything Pop Evil is about.

Songs like “Inferno”, “Breathe Again”, and “Survivor” sound equally destined to take their place in the pantheon of Pop Evil signature songs that mean so much to devoted fans and casual listeners alike. Each is just as poised to conquer new genre formats.

No. 1 smash “Waking Lions” was designed “to remind our fanbase that we’re not afraid to turn up the guitars. Just because we’re ​Pop Evil, don’t forget about that ‘evil’ element.” The new LP builds on the foundation laid by that 2018 album specifically, springboarding with melodic heft and hook-filled heaviness blending hard rock, alternative, and pop with punch.

The band bunkered down in Los Angeles in the winter of 2019 to put the finishing touches on the new record, working with new creative teams of producers and collaborators, each enlisted to emphasize the uniquely varied aspects of the band’s sound. “We worked with multiple producers that fit each song’s dynamic,” the band’s hardworking singer explains.

Collectively, Pop Evil’s previous five albums account for over a million copies in worldwide sales and over 600 million streams.. ​Lipstick on the Mirror found its way to listeners via a major label re-release, despite the business trouble that resulted in the band tearing up their major label contract on stage, in what ​Spin Magazine called one of the Ten Best Moments of Rock on the Range. War of Angels​ brought Pop Evil to a worldwide audience.

Pop Evil combines the bigger than life bombast of Mötley Crüe or KISS with the earnest warmth of Pearl Jam, mining the same depths of creativity and emotion found within the cosmic riff foundation of legendary active rock, hard rock, and modern rock acts like Soundgarden and Alice In Chains. The Pop Evil faithful are a broad and dedicated group of fans around the world, people whose support was earned, one by one, show by show.

This is a band that unapologetically flies the flag for their chosen form of creativity. Rock n’ roll music is as American as apple pie. It’s particularly important in the Midwest, where Pop Evil was born. Fans who are living paycheck to paycheck, struggling to support families with a 9 to 5 gig, rely on the music made by bands like Pop Evil to help them endure the daily grind.

The signature Pop Evil elements of the past are found in the music they make today, amplified and sharpened like never before. The utmost respect is paid to the fans; part of that respect is in making sure to never simply repeat what’s come before. The “Evil” will move the crowd. The Pop embodies groove, vibe, and atmosphere, extending a warm welcome to all comers.

“We’ve got loud and heavy guitars while staying true to the groove we’ve had with songs like ‘Take it All’ and ‘Footsteps’. We have that ‘Pop’ and that ‘Evil’ just as we’ve always done. And with this record, we’ve taken another big step into our own definitive sound and identity.”