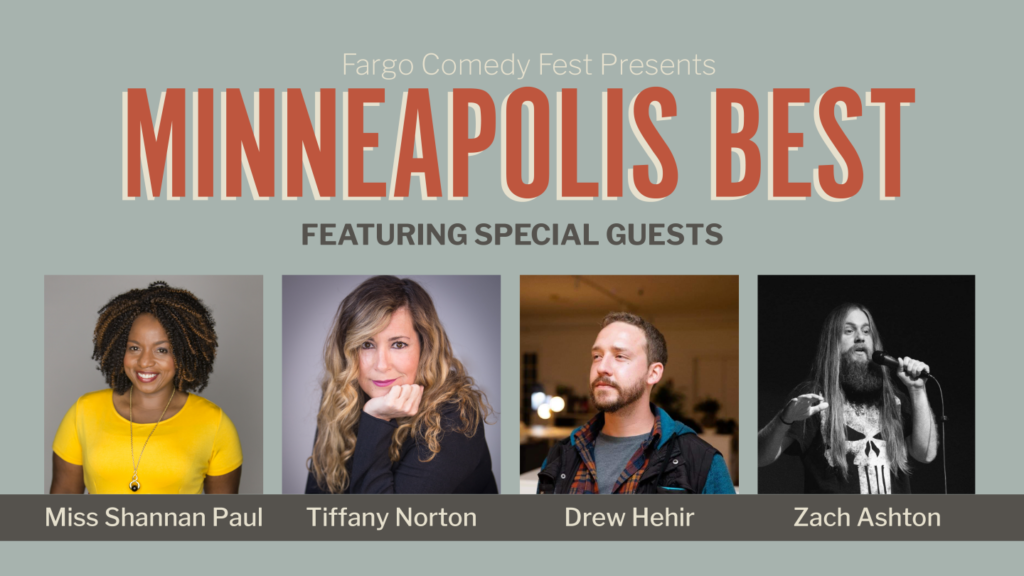 Miss Shannon Paul: A self-labeled Geek, Miss Shannan Paul brings roaring laughter to even the most curmudgeonly of crowds. Twin Cities newspaper, the City Pages says, “No matter where you’ve seen (or heard) her, you know just how great Miss Shannan is. With comedy that’s personal and relatable, she has the ability to make you feel like you’ve been friends for years, even if you’re only seeing her for the very first time.”

Tiffany Norton: Originally from St. Paul, MN, she is currently a touring stand-up comedian, Radio Personality/Traffic Reporter and Executive Producer of the award-winning, Staci & Hutch Show on KS95-FM 94.5 in Minneapolis. Tiffany began her stand-up career a decade ago and has been entertaining audiences with her confident stage presence and mischievous point of view ever since.

Drew Hehir: His performances include multiple Minneapolis venues: Acme Comedy Co & Sisyphus and ND venues: The Ground Round in Grand Forks & The Cellar in Fargo. He was also a finalist Funniest Person in Minneapolis Contest at Sisyphus.

Zach Ashton: His performances include multiple Minneapolis venues: ComedyClub Underground & Acme Comedy Club and ND venues: The Ground Round in Grand Forks, Sanctuary Events Center & The Cellar in Fargo. He was also a finalist Funniest Person in Minneapolis Contest at Sisyphus.