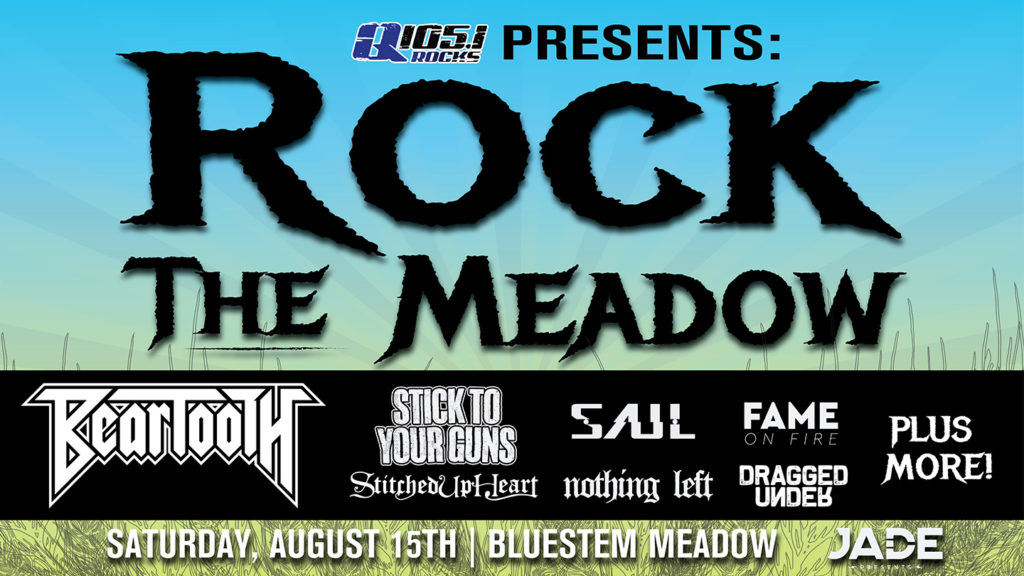 Q105.1 Presents: Rock The Meadow originally scheduled for Saturday, August 15, 2020, at Bluestem Meadow is being postponed due to COVID-19. Many of the bands on the bill are choosing not to tour in 2020 so we are working hard to lock in a new date for August 2021. All tickets purchased will be honored for the new show date. If you have any questions or concerns, please reach out to Tickets300 at [email protected] or 866-300-8300. 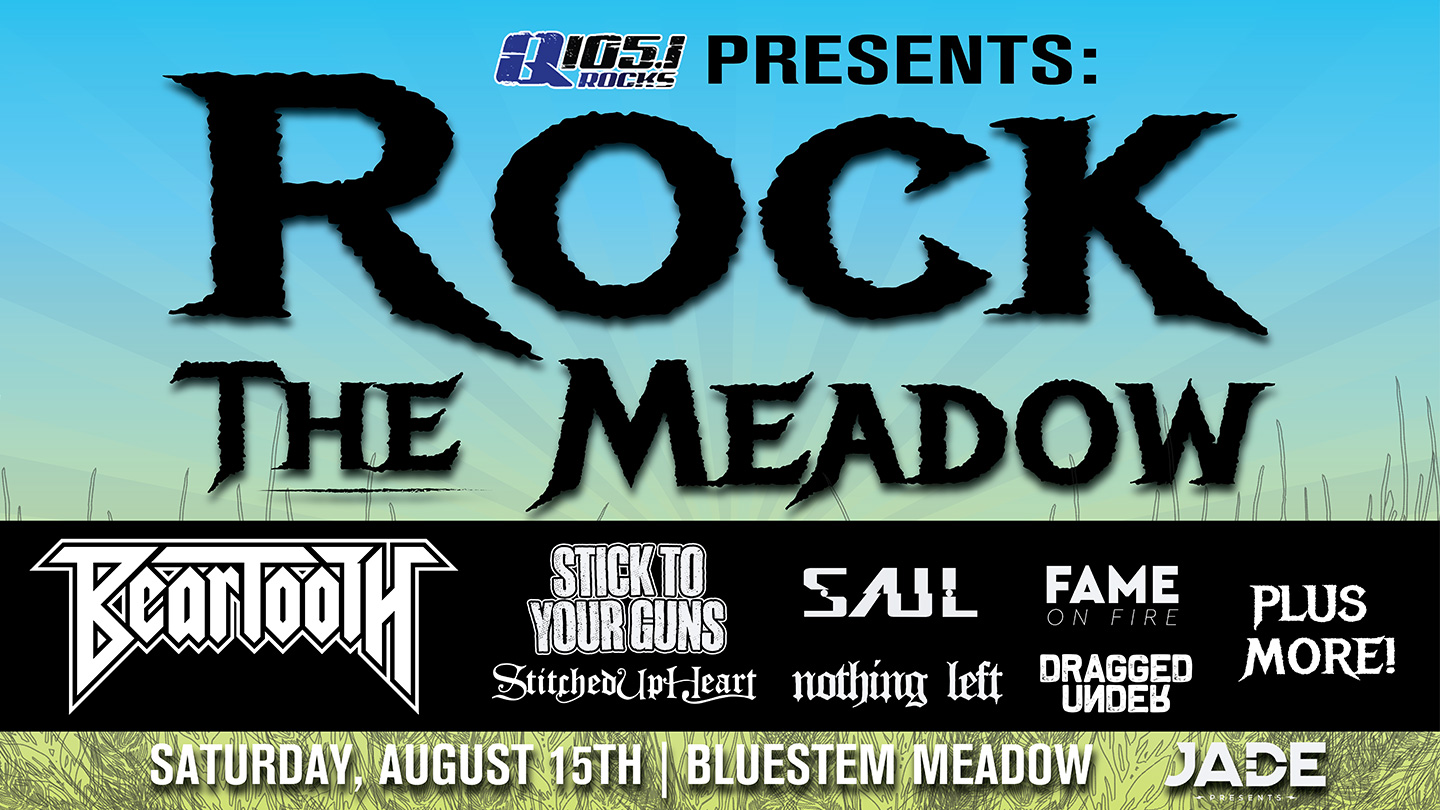 Q105.1 Presents: Rock The Meadow originally scheduled for Saturday, August 15, 2020, at Bluestem Meadow is being postponed due to COVID-19. Many of the bands on the bill are choosing not to tour in 2020 so we are working hard to lock in a new date for August 2021. All tickets purchased will be honored for the new show date. If you have any questions or concerns, please reach out to Tickets300 at [email protected] or 866-300-8300.

August 2020 is going to rock! Jade Presents and Q105.1 (KQWB FM) are pleased to announce the inaugural Rock The Meadow. The event will feature two stages and 14 bands crammed into Saturday, August 15. The Main Stage will feature Beartooth, Saul, Fame on Fire, Nothing Left, Stitched Up Heart and Dragged Under. The Live and Local Stage will feature Dearly Departed, Anomic, Wildview, Gorgatron, Swing Low, Baltic to Boardwalk and Widow.

Beartooth shares equal inspiration with brutal metalcore as with old-school punk like The Ramones and the bombastic theatricality of Queen. The end result is a back-to-basics hardcore stomp that would get the crowd moving at a Hatebreed or Terror show, interspersed with a steadfast determination to give equal importance to anthemic choruses. The Columbus, Ohio band Beart began as a way to blow off steam and add another dimension to lead singer Caleb Shomo’s genre-hopping creative output. They released an EP, Sick, and then hit the road, touring North America and Europe with genre titans August Burns Red, Memphis May Fire, The Word Alive and Of Mice & Men, among others. The EP’s accompanying music videos for “Go Be the Voice” and “I Have a Problem” (both live and traditional) quickly accumulated over one million views, and set the stage for the band’s next endeavor, Disgusting.  Shomo found himself thrust into the front man role following a series of lineup changes. The band’s self-titled sophomore effort debuted at No. 1 on Billboard’s independent chart. Shomo was handling all of the vocals, programming and production duties by the time the third album, This Means War, broke into the Top 10. The record sold 17,000 copies in its first week, debuting at No 8 on the Billboard Top 200. Disease, the band’s latest album is out now.

Since emerging in 2003, Southern California’s Stick To Your Guns—Jesse Barnett (vocals), Andrew Rose (bass), George Schmitz (drums), Chris Rawson (guitar) and Josh James (guitar)—have merged socially conscious and outspoken lyricism with hardcore energy and hammering metallic force. They took a bold step in a new direction on their sixth full-length album, True View (Pure Noise Records) by expanding their grasp of melody, amplifying the haunting clean vocals and incorporating actual phone conversations to thread together a narrative of self-realization. Through countless shows and a steady stream of music, the band has attracted a devout fan base. Among many accolades, Diamond would bow at No. 1 on Billboard’s Heatseekers Chart in 2012 as 2015’s Disobedient went Top 100 on the Billboard Top 200 and clinched No. 2 on the Hard Rock Albums Chart. Most recently, the 2016 EP, Better Ash Than Dust, repeated the No. 2 debut on the Hard Rock Albums. “Universal Language” ignited over 1.5 million Spotify streams. Moreover, 2017 saw Stick To Your Guns make history, becoming the first American hardcore band to play East Africa in Nairobi, Kenya.

The Iowa based hard rock band Saul is the result of a profound passion for music shared by brothers Blake and Zach Bedsaul. They always knew music would be their life and worked tirelessly to develop a sound that pushes the boundaries of modern rock music. Saul places a great amount of focus on writing songs that mean something. Forming their sonic inspiration listening to bands like Tool, Pearl Jam, Nothing More and Tesseract, the band has now rounded out its lineup to include William McIlravy (Bass guitar/Backup Vocals), Joe Nichols (Drums), Blake Bedsaul (Lead Vocals), and Zach Bedsaul (Lead Guitar/Backup Vocals). Their debut album is AEONS.

Since their formation in 2013, Fame On Fire has evolved from a solo drum cover project to a fully-formed rock band. They have made traction with their covers of Top 40 hit, including a release of Adele’s “Hello” that hit one million views in less than a month and currently has over 20 million views. Riding the wave of the “Hello” hype, Fame On Fire issued a self-produced five-song EP, Transitions, in May of 2017- the first release featuring their original music. Following Transitions, the band released a cover of Lil Uzi Vert’s “XO Tour Llife”, which went viral and reached number 48 on Spotify’s “Viral 50” playlist. “Over It” follows a number of covers and singles released over the past year, including “Count It Up”, which reached one million streams on Spotify in just three months. The band has been featured on playlists such as “New Music Friday”, “New Noise”, “Rock Hard” and “Volume Màximo”, and was also included on Apple Music’s “Breaking Rock” playlist. Fame On Fire is Bryan Kunitz (vocals), Blake Saul (guitarist), Paul Spirou (bass) and Alex Roman (drums).

Nothing Left are back with the follow-up to 2017’s debut Destroy and Rebuild EP. Their first full-length release, Disconnected picks up where they left off – a high energy, stripped down metallic hardcore sound, reminiscent of the dynamic underground music scene of their youth. The band, comprised of members from For Today, Silent Planet, Take It Back! and ABFPB, brings a wide range of influences within the heavy music scene together to create their own aggressive sound. Disconnected is the newest release from Facedown Records.

Stitched Up Heart – a band built around the strength that comes from realizing we are the only ones that control our lives, and focused on the hope that reminds us there is always light at the end of the darkest tunnel. It’s something heavy and powerful, jarring the album’s epic closing track “I Can’t Breathe” from a piano-paced ballad that would do Lady Gaga proud, to a metallic onslaught of drop-tuned guitars that is sure to see the band sharing a stage with the hardest of their hard rock peers. “Finally Free” thrust the band into the national spotlight in early 2016, exorcising its demons and riding breakthrough success on SiriusXM Octane into the Top 20 at Active Rock radio.  From the bombastic, dark and seedy tribute to their Los Angeles home that is “City of Angels,” into the great beyond via the cinematic super nova that is “Event Horizon” – the metaphoric closing of one door and the opening of a new chapter – the debut album oozes with a voice as powerful as the music, and music as compelling as the voice it carries.

Dragged Under call Seattle home. The punk rockers released their debut album The World Is In Your Way featuring the singles “Chelsea” and “Instability” in January 2020.

Creating powerful and driving guitar riffs accentuated by soaring rock and roll choruses in the vein of As I Lay Dying meets Nothing More, the Minnesota quartet that makes up Dearly Departed, brings an intense live show, crowd pleasing riffs and range defying vocals. In their region, they have established themselves as one of the best up and coming hard rock acts, drawing hundreds of people in their local market along with interest and radio play on clear channel radio Q105.1 in Fargo, N.D. and 93X in Minneapolis, Minn.

Swing Low is a hardcore band from Fargo.

Fargo’s Baltic to Boardwalk draws from a variety of influences. With each member bringing their own ideas, they write as a group. In their years as a band, they have shared the stage with larger touring acts such as Comeback Kid, Touché Amoré and Daytrader. They have played in over 30 states, with plans to add the rest as soon as they can. Their goal has always been to work hard, have fun and make as many friends as possible. Their debut full length, Heathens, was released April 29, 2017. The band is comprised of Jack Stenerson (guitar, vocals), Adam Smith (guitar, vocals), Ryan Hoffart (vocals), Curtiss Hamende (drums) and Jesse Kepford (bass).

Widow is a new death metal band based in Fargo.