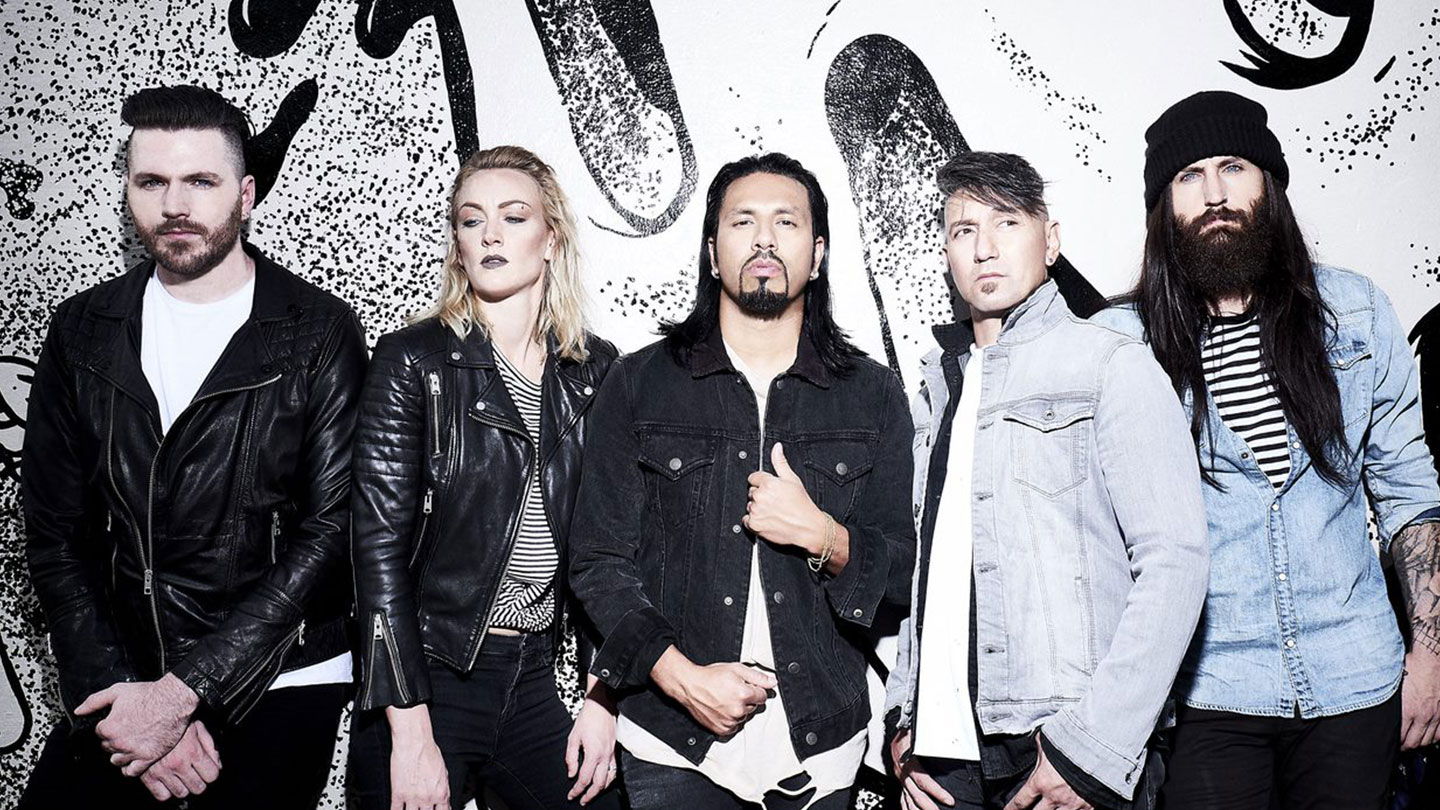 When North Muskegon, Michigan native Leigh Kakaty formed Pop Evil, he chose the band’s name for a reason. He loved hard rock songs with good melodies but he also dug loud, crunchy guitars and propulsive metal rhythms. For Kakaty, it’s a natural duality that came from growing up in the Great Lakes and it eventually became the raison d’etre of his band.

“It’s just a natural part of who I am,”​ Kakaty says. ​“When I was growing up we’d roll out to the beach on the weekdays with an acoustic guitar and everyone would kick it. And on the weekends, we’d turn up the amps and, boom, everyone would try to break windows. It was all about the heaviness. And I needed both of those elements – the melodic and the metallic.”

Five albums into Pop Evil’s career, combining strong hooks with knockout punches is more important than ever. The band’s new record, simply called ​Pop Evil​, is a surging, contemporary sounding release that incorporates metal, alternative, hard rock and even electronic music. In the wake of the band’s peppy, upbeat 2015 album ​Up​, it’s a wake-up call, a musical rebirth that inspired the band to self-title the release, partially since they’d never done so. Their first album, ​Lipstick on the Mirror​ came out in 2008, and while it introduced listeners to the band’s core sound with well-received singles like “​Hero​” and “​100 in a 55​,” Pop Evil has grown exponentially since then.

Pop Evil captures Kakaty and his bandmates – rhythm guitarist Dave Grahs, lead guitarist Nick Fuelling, bassist Matt DiRito and drummer Hayley Cramer – at their most inspiring. Every song on the album offers a different spin on the concept behind the band’s name and in an era when many rock bands create a few strong singles, and six or seven less memorable songs and call it an album, Pop Evil is all killer, no filler – the best 11 songs culled from 30 demos.

There’s plenty to be excited about on Pop Evil. The first single, “​Waking Lions​” starts with clattery electronic drums and a chugging guitar riff interjected with a squealing harmonic, then the first verse kicks in like a mob smashing down the doors the confine them. As Kakaty hits the euphoric chorus – backed by buzzing guitars and a minor-key counter melody – he sings about reaching within and overcoming obstacles ​“I want to stand up 100 feet tall / ‘Cause fear will never lead my way / I’m ready to run 100 miles strong / I will never be the same.”

By contrast, “​Colors Bleed​” – for which the band shot an insightful video — was inspired by current events and features a charged rhythm, incisive guitar licks, and confrontational vocals. ​“Step aside watch the colors bleed / The rise of democracy / Fight the System / Stop and listen / True colors, how can you miss ‘em? / Born with knowledge, raise the fist / Face the enemy, just resist.”

The song blends aggressive rock vocals and rapping, bringing to mind Rage of Machine (even if the bridge and solo sound more like Pink Floyd).​ “Rage was my favorite band growing up,”​ admits Kakaty. ​“Because he was a frontman of mixed race, Zack de la Rocha was my hero. He was the guy that I could relate to when I grew up rapping. In the beginning of my career with Pop Evil, I moved away from that vocal approach in hopes to find the right song to bring it back. It just naturally happened on this record.”

Lyrically, songs like ​“Colors Bleed”​ cover new ground for Pop Evil. Instead of being about dysfunctional relationships, self-empowerment or mortality, Kakaty digs into today’s headlines and addresses what he feels about capitalism, hypocrisy and violent confrontation.

“It was important for me to document things that we’re going through right now, such as what happened in Charlottesville, what’s going on with North Korea and where the government is at,”​ he says. ​“As a lyricist, I need to address all sorts of subjects and emotions and politics is a part of that. I felt I needed to write about the things I’m feeling as a mixed American — someone whose mom and dad came to this culture with big dreams, hopes, and aspirations because this is the land of the free and the home of the brave. Anyone who comes to America is a native of this country, so it’s so important that we all come together. When we join together, everyone wins.”

“With a band name like Pop Evil, we felt like the Evil has always been de-emphasized just because of the situations we were in,”​ Kakaty says.​ “It always seemed like the people around us wanted to focus more on radio play or writing more mainstream, melodic stuff. That’s definitely a part of what we like to do, but this time we made a rock album for rock fans. And, in general, rock fans are real Middle American, middle or lower-middle class people who get forgotten about. Secular music has pretty much told the world that rock and roll and metal music don’t matter anymore. Having lived that life and thrived as a rock band, it’s hard not to take offense to that, but it’s important to try to be a part of the solution rather than the problem. And we’re doing that by turning up the amps and saying, “Look, we can make heavy songs that really rock and we can also write catchy songs that someone who likes Pearl Jam or Led Zeppelin can get into.”

The struggle was a regular obstacle for Pop Evil as they prepared to record their definitive album. Before they could finish the ​UP​ album cycle, they had to find a new drummer. Joshua Marunde (AKA Chachi Riot), who had been with the band since 2011 gradually lost interest in being a touring musician and decided to open his own CrossFit gym. He stayed with the band until the end of May 2016 in support of ​Up​ and then amicably parted ways with the band, forcing them to find a replacement while on the road.

After some soul searching, their management team brought a few ideas forward, one being a female drummer and the band members decided that it could be a terrific idea to work with a female drummer in order to give the band a new perspective that wasn’t solely motivated by testosterone.

They took recommendations from industry contacts and invited a bunch of women to email them audition videos. After carefully examining a bunch of playthrough videos one stood out to Pop Evil. It was one video sent in by English drummer Hayley Cramer (ex-McQueen) who they invited for a try out in their hometown and absolutely blew the band away. The band decided to bring her out on the road while Chachi was finishing his role and split time during the month of May 2016. She entered into the band with total confidence and a new artistic vision.

“As soon as we saw her video we were like, ‘Oh my goodness. She’s the one,’”​ Leigh Kakaty says. ​“Her first tour with us was in packed arenas opening for Rob Zombie and Disturbed. It was crazy, but when things work, they work. She’s been like the big sister we never knew we wanted but we’re so glad we have. And she’s so passionate about the music. Songs that we’d been playing for years suddenly came to life in a different way and then she came in and killed it on this record. It was a rejuvenation for us. She’s nothing short of a blessing.”

With Cramer’s help, Pop Evil wrote a batch of new songs in their practice space before they started demoing. In addition to making sure the album was heavier than ​Up​, they wanted the time to create the album they wanted to make. While they had been forced to rush through past albums in three or four months so they could return to the road (the band had averaged 200 live concerts a year over the last ten years), they dedicated a full year to completing Pop Evil.

“When you’ve got a bunch of material to work with, weeding that all out takes time,” ​Kakaty says. ​“We’d wind up going with things we didn’t know if we were completely sure was right for the album and then I’d have to put lyrics on and if I didn’t totally believe in something it was hard to put my heart and soul into the vocals. So finally, for the first time ever, the record company/management agreed to give us the time needed to make the record and we worked really hard this time to try out everything and really use the best of the best.”

In Spring 2017, Pop Evil went to Sound Emporium studio in Nashville to work with Kato Khandwala. The band worked in Nashville between June and August, then went to Los Angeles to record vocals and Sphere Studios.

“In the past, we’ve all done our parts and it was a little awkward,”​ Kakaty says. ​“This time, everyone was together. Everyone was there in the studio offering their opinions and Kato was there to make sure we didn’t veer off track and to push us to deliver our best performances.”

Looking back at Pop Evil, Kakaty is thrilled that it came out exactly how the band wanted it to. The experimental parts give the album a cutting edge sound and the melodic passages – whether they comprise the crux of the chorus, verse or both – are undeniably memorable. At the same time, the band didn’t compromise when it came to delivering powerhouse metal riffs and emotionally expressive vocal lines.

“With every album, we’ve been able to branch off a little and do more of what we wanted to do,” Kakaty says. “With this record, we really feel like we finally got all the pieces together and created this monster of an album. It’s everything we talked about and strived for and we can’t wait to go out and really show people who we are.”