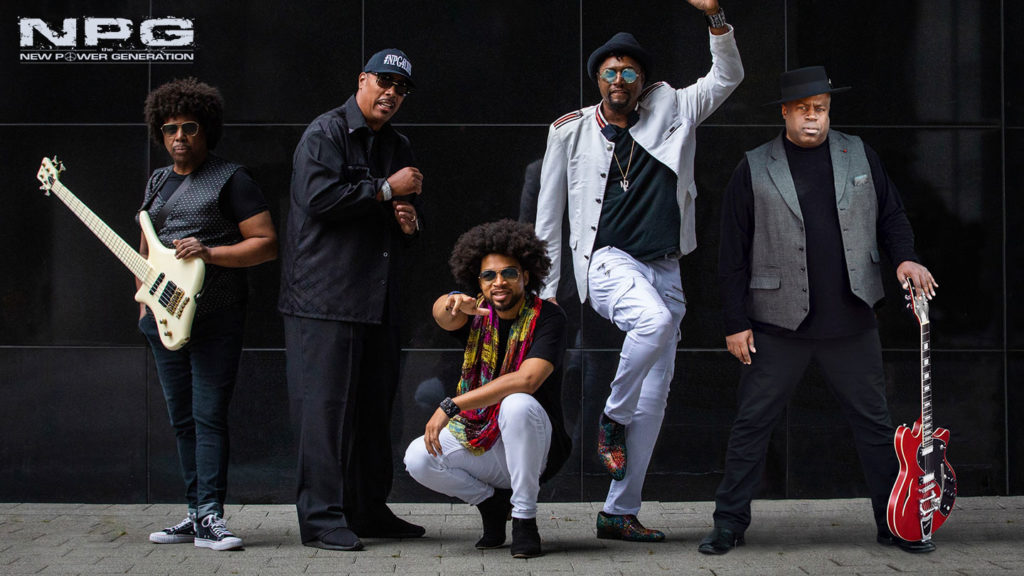 The September 18 New Power Generation show at Fargo Brewing Outdoor in Fargo has been postponed to 2021 due to Covid restrictions. We are working hard to quickly lock in new dates. Any tickets purchased will be honored for the new show date. If you have any questions or concerns, please reach out to [email protected] or 866-300-8300. 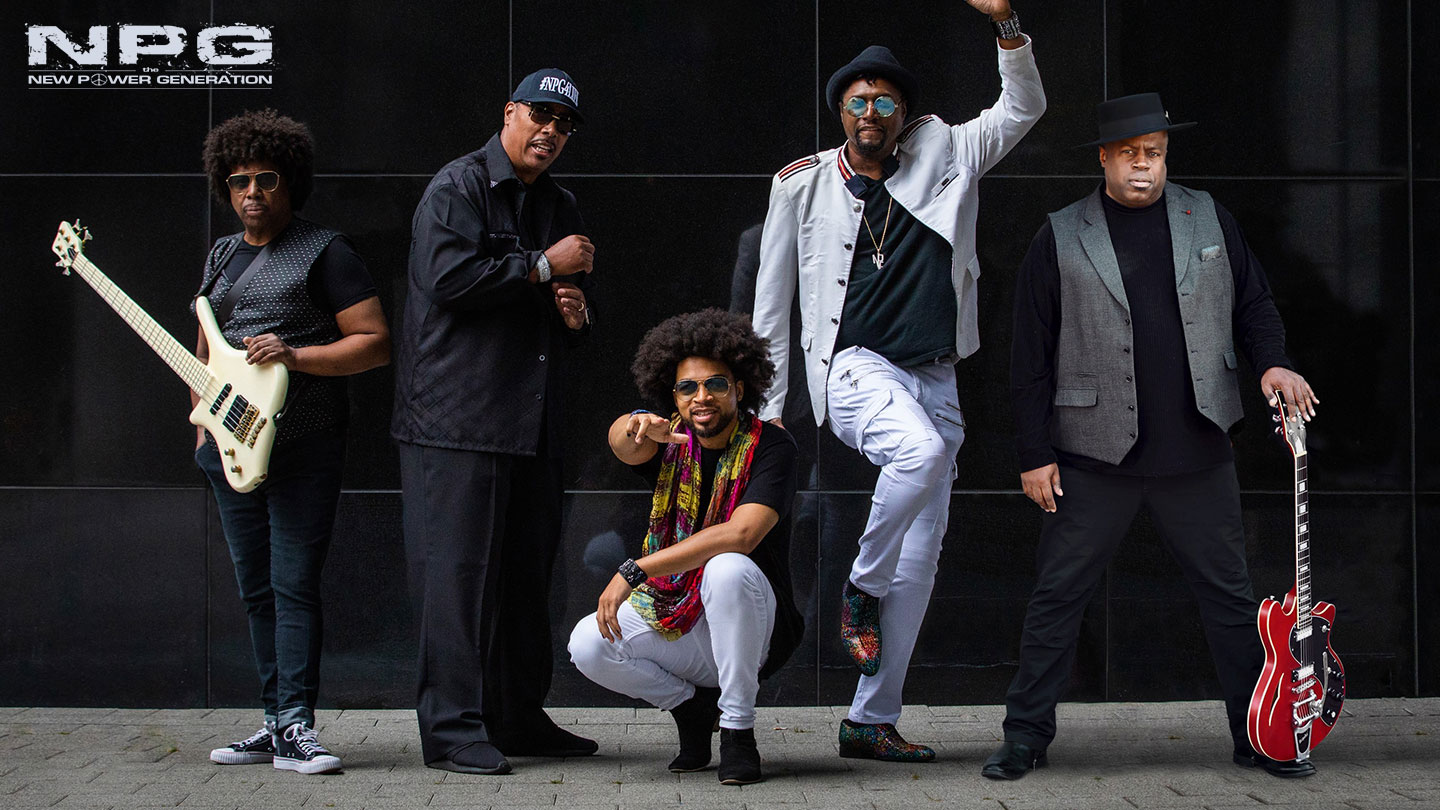 The September 18 New Power Generation show at Fargo Brewing Outdoor in Fargo has been postponed to 2021 due to Covid restrictions. We are working hard to quickly lock in new dates. Any tickets purchased will be honored for the new show date. If you have any questions or concerns, please reach out to [email protected] or 866-300-8300.

The reunion of former members of the New Power Generation (NPG) – including a number of those in the original configuration – was born out of the official Prince Tribute concert in October 2016. The longest-running member of the NPG, keyboardist Morris Hayes, who also served as Prince’s Musical Director for many years, was tapped to do the same job for the official tribute concert held in honor of the legendary artist. Hayes brought many of the original band members back together to serve as the house band (where they were joined by other NPG alumni throughout the night) for the epic musical celebration and the feedback from the fans was that the official tribute concert was both exhilarating and healing. “Exactly what we needed” was a typical comment. Given the overwhelming response to that historic event, Morris, Sonny T, Tommy Barbarella, Tony M, Damon D, and Levi Seacer met with one of Prince’s former managers to discuss an official reunion in order to bring a live celebration of Prince and his music to ‘fams’ throughout the world. Their intent: to honor their boss, their mentor and his music. Thus, the birth of the NPG’s tour featuring the music of Prince was underway. The band has since joined forces with other Prince alumni and world class artists to perform their own tribute concerts to their legendary mentor and brother, Prince.

After touring with several different guest vocalists during their first year out, the band stumbled upon its official lead singer in the soulful and charismatic MacKenzie – an LA- based singer, originally from a small town in Virginia. With his incredible vocal range, commanding stage presence and beautiful voice, MacKenzie has wowed both audiences and critics alike. Even more important, the ‘Prince fams’ (as Prince called them) quickly embraced him. MacKenzie’s immense talent coupled with his unique and reverent approach to the songs never strays into an impersonation. Instead, his own gifted artistry shines through in a way that the band is confident Prince would approve. Just like the NPG, the man is funky!

“Respecting the music” is the philosophical approach that guides the NPG and was an important lesson from Prince, according to long-time NPG keyboard player, Morris Hayes. “Few other artists have the work ethic that defined Prince,” says Hayes. “He was a consummate live performer.” As well, his concerts with the NPG were legendary for their tight arrangements, stellar sound and electrifying pace. The NPG strive to play as if their famous boss was still front and center. Their shows are a non-stop musical kaleidoscope of the most iconic chart-topping hits from all eras of Prince’s career. Classic NPG songs like “DIAMONDS and PEARLS,” “GETT OFF,” “CREAM,” “7,” and”SEXY MF,” are intermingled with hits from throughout Prince’s illustrious 4- decade-long career like “1999,” “LET’S GO CRAZY,” “POP LIFE,” “SIGN O’ THE TIMES,” “PURPLE RAIN,” “U GOT THE LOOK,” and “KISS.”

When Prince first formed the band in 1990, he drafted a press release in his own handwriting to introduce the NPG to the world. Writing that his new band was his “best band ever,” this new band took him down a new path – one that was soulful, electrifying and funky! In fact, they soon became known by their fans as ‘the funkiest band in the land.’ It was a pivotal time for Prince – creatively and professionally. The New Power Generation were words that likely had a meaning deeper than ‘just’ the name of his new band. It seemed to represent a philosophical approach to life. A statement to the world. Although he parted ways with The Revolution in 1986, Prince recorded and toured as a solo artist for nearly four years before introducing the NPG to the world in the summer of 1990 when most of the members made their live debut on his Nude Tour. (Although the NPG was also the name of his band in the film, Graffiti Bridge, which included the song, “New Power Generation” on the accompanying soundtrack album.)

“Lay down your funky weapon, come join us on the floor. Making love and music’s the only things worth fighting 4. We r the new power generation, we want 2 change the world. The only thing that’s in our way is u. Your old fashioned music, your old ideas, We’re sick and tired of u telling us what 2 do. We r the New Power Generation…” (Prince)

Music critics around the world expressed their excitement about Prince’s new musical direction with the NPG. Most reviews of Prince & the New Power Generation’s “Diamonds & Pearls” pointed to the musical synergy between him and his new band – such as this Spin Magazine review of ‘D&P’ in a look back at staffers’ favorite Prince albums written after his death in 2016:

“Prince was in a transitional place in 1991… and was in the midst of a creative renaissance following the Nude Tour with his newly-formed band, the New Power Generation. After the critical and commercial success of ‘Sign o’ the Times’ in 1987, Prince had started moving back towards the funk and R&B of his earlier years after several albums of more pop/rock-oriented material. But it wasn’t until 1990 that he began putting together his new “official” backing band. With Diamonds and Pearls, Prince married his new band to Bomb Squad-style hip-hop production and New Jack Swing (a distinctive mix of R&B, dance, and hip-hop that had emerged in 1987) while also delivering his most accessible set of pop songs since 1984’s Purple Rain.

“‘Gett Off’ hit radio that summer, a supercharged sex anthem laced with booming bass, an instantly catchy flute, and a Public Enemy-style “kettle whistle” sax loop. It announced that Prince was back — and not just with a new album. This was Prince’s brand of hard funk and dance filtered through hip-hop aggression and edge, a raunchily aggressive track that served as announcement that Prince still understood the times — and he could grasp what was happening in R&B/pop, meld it into his own sound, and still be Prince…

“‘Thunder,’ the album opener, is a straightforward melody buried under an ornate production that features o throwing in synth-sitar loops, heavy guitars, and hard drum beats — establishing the album’s sonic trademarks — before it explodes into a coda showcasing some of Prince’s virtuosity. It’s more confident than almost anything on Graffiti Bridge but unlike a lot of Prince’s classic album openers, it’s merely a musical appetizer for what follows.”

The configuration of the band occasionally changes but always with NPG alumni making up the majority – if not the entire band. On this tour will be MacKenzie, Morris Hayes (MD and keyboards – joined the NPG in 1992 and is known for being the longest- running member at 20+ years), Tony Mosley (guitar and vocals – joined the NPG in 1990), Sonny Thompson (bass – joined in 1990), Levi Seacer Jr. (guitar- joined in 1990 and also played on the Sign O’ the Times and Love Sexy tours) and drummer Brandon Commodore from the Grammy-nominated band, Mint Condition.