POSTPONED / Essentia Health Presents: An Intimate Evening with ALABAMA – 50th Anniversary Tour brought to you by Midwest Radio of Fargo-Moorhead 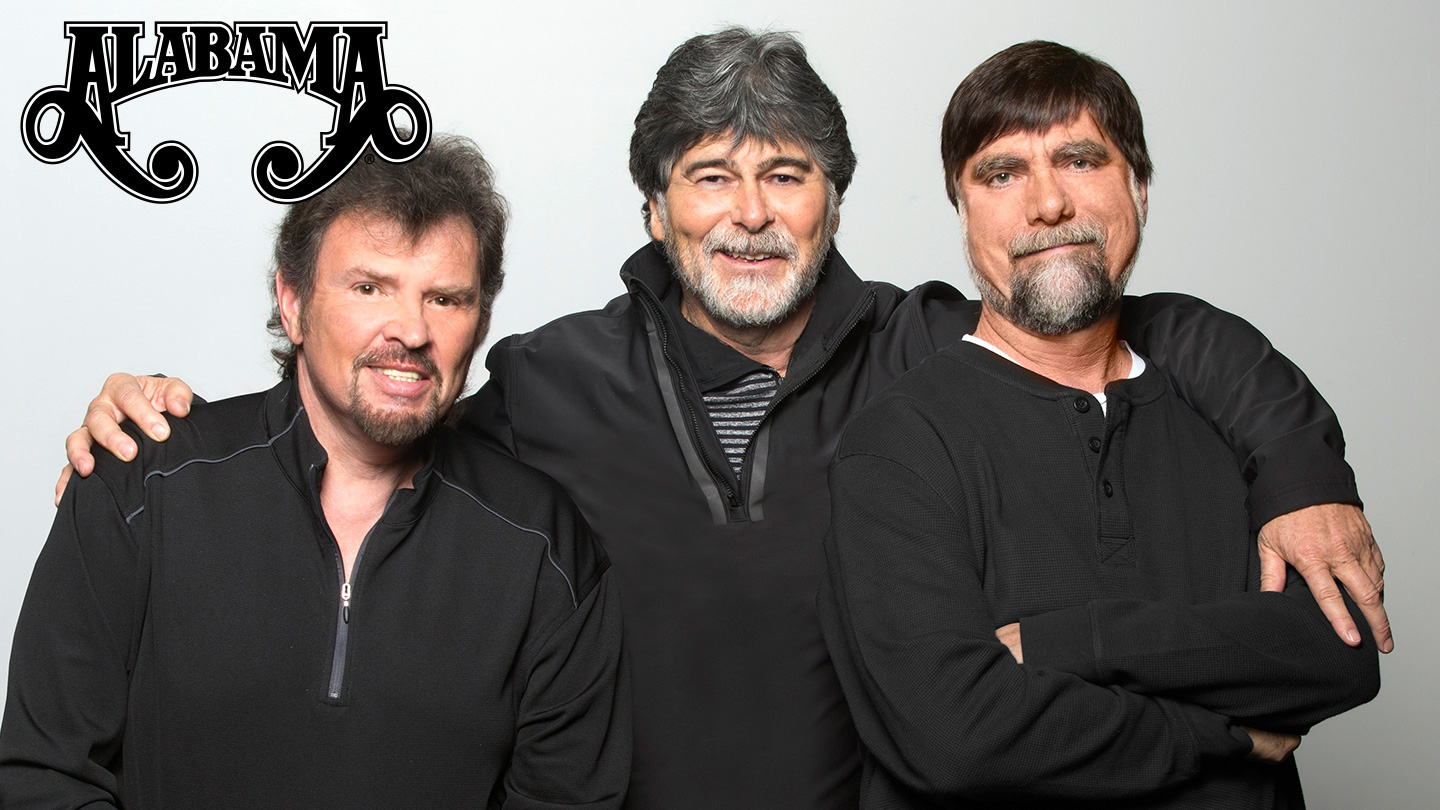 For the health of our patrons, our staff, and the wellbeing all, ALABAMA’s 50th Anniversary Tour at Bluestem Amphitheater scheduled for Saturday, June 6th, 2020, is being postponed. The new date is yet to be determined. Any tickets purchased will be honored for the new show date. We apologize for any inconvenience, and hope that you continue to take care of yourself and each other! If you have any questions or concerns, reach out to Tickets300 at [email protected] or 866-300-8300.

It’s the kind of story you read about in books and watch on the big screen at the movies. For the band ALABAMA, it’s not just a story; it’s their life. It is a classic American tale of rags to riches. From humble beginnings picking cotton in the fields to international stars that went on to sell 73 million albums while changing the face and sound of country music.

It’s been over 40 years since Randy, Jeff and Teddy, left the cotton farms of Fort Payne, Alabama, to spend the summer playing in a Myrtle Beach, South Carolina bar called The Bowery. Having grown up working in the fields, the cousins were no strangers to hard work. They didn’t flinch when it took six long years of working for tips and living hand to mouth playing in the bar.

Of the early days and their humble beginnings, Jeff says, “I don’t think we thought too far ahead. We were more concerned with paying our bills at the end of the week and playing music.”

Finally, word of mouth earned the major label deal they’d been dreaming of. In 1980 the band broke through with their first Top 20 hit “My Home’s In Alabama.”

ALABAMA is the band that changed everything. They brought country music to the mainstream and from side stage to the main stage. ALABAMA introduced rock style guitars, lights, pyrotechnics and sounds to the country audience.

“We were renegades in sneakers and T-shirts,” says Teddy. “We had long hair and played loud and some of the country folks resisted us for a while. But then of course they did accept us and then after that, our success made it lots easier for other bands to try it in country music,” concluded Gentry. Bands benefitting from that breakthrough include Zac Brown Band, Florida Georgia Line and Eli Young Band.

They have also inspired many of today’s brightest country stars including Kenny Chesney, Jason Aldean and Luke Bryan as well as pop and rock stars from Ed Sheeran to Jon Bon Jovi.

“I was part of a benefit concert at the Ryman,” he says, “and I look over there’s Jon Bon Jovi. He walked over and said hello and it turns out he’s a fan of our music.”

ALABAMA’s reach goes far beyond their impact on other artists; their music is timeless and can be heard today as a part of every cover band’s set list in nearly every college town in America.

Not long ago, Teddy was witness to a scene that reminds us that their legacy of song remains as fresh as it ever was.

“I was in Nashville,” he says, “walking by this club full of young people–I’m talking 18 or 20. The band started playing ‘Dixieland Delight’ and everybody in the place started singing and sang all the way through. I had to smile at the longevity of the songs. Half the crowd at our shows is young people, under 25 years old. So I think that’s a tribute to the fact that we spent a career putting out good songs that stand the test of time.”

While their music continues to stand the test of time, their numbers and stats are beyond compare. The and has sold over 80 million albums. They have charted 43 #1 singles including 21 #1 singles in a row, a record that will likely never be surpassed in any genre. They have won over 178 CMA Awards, Grammy Awards, ACM Awards and counting. They’ve earned 21 Gold ®, Platinum ® and Multi-Platinum ® albums and were named the RIAA’s Country Group of the Century. They are members of the Country Music Hall of Fame and have a start on the Hollywood Walk of Fame. They are also world-class philanthropists who have raised over 250 Million dollars for charity.

The band continues to perform to legions of loyal fans, selling out venues night after night. They were honored with the ACM Career Achievement Award at the Ryman Auditorium in the Fall of 2015 and were named “Album Of The Year” at the 2015 Dove Awards for ANGELS AMONG US” HYMNS & GOSPEL FAVORITES.

ALABAMA continues to thrill fans as their 50th Anniversary Tour Rolls throughout 2019 in the US and Canada. ALABAMA is and always will be the greatest country band in American history.