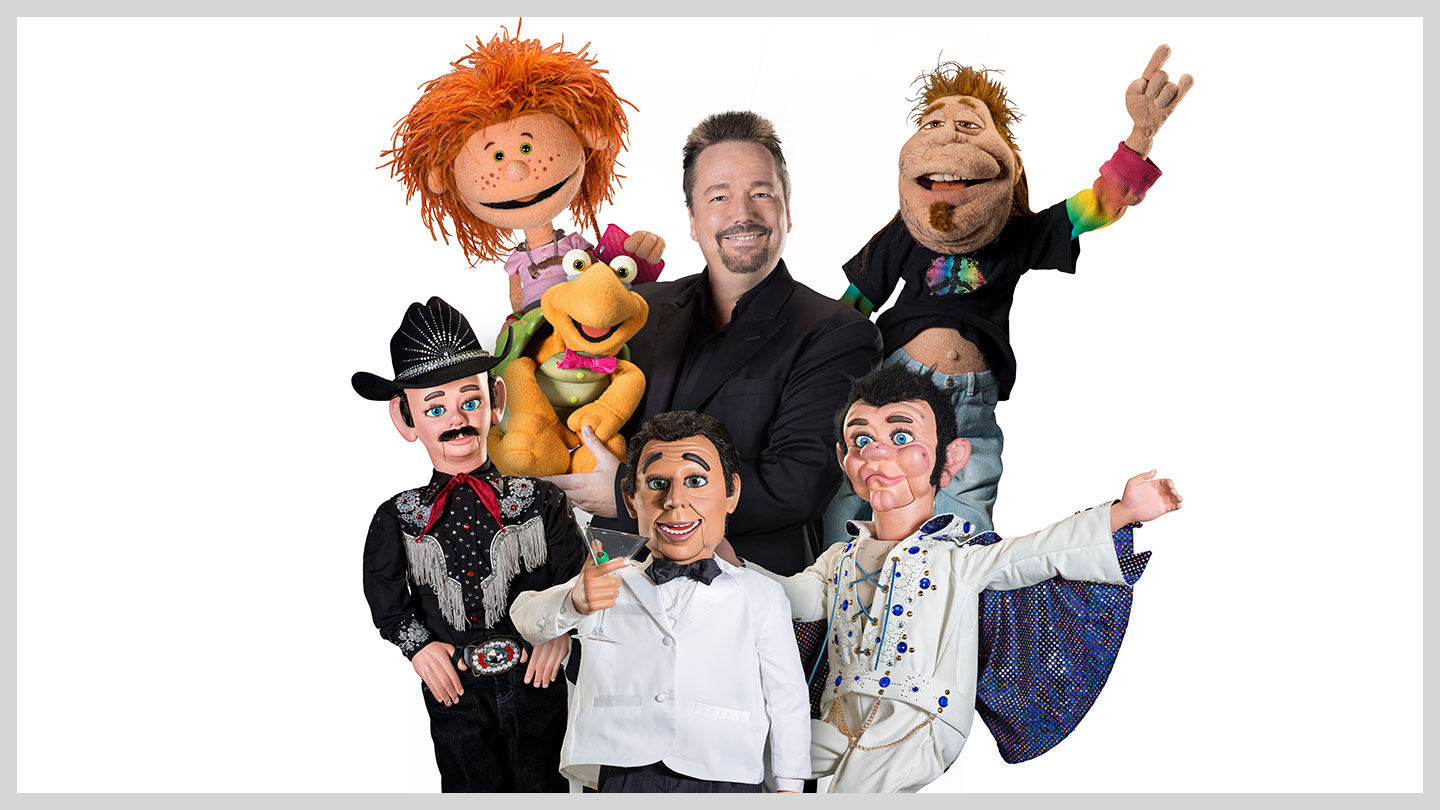 Due to unforeseen circumstances, the Terry Fator live event, previously scheduled for Sunday, September 29, at Bluestem Amphitheater in Moorhead, Minn., is canceled.

All refunds will be provided at the point of purchase. All credit or debit card purchases through the Tickets300 Box Office (via tickets300.com or by phone) will be refunded automatically. Cash purchases should be returned at the point of purchase at Tickets300 box office (302 N. University Drive in Fargo; open 10 a.m. to 6 p.m. Monday-Friday). Please bring in the tickets purchased for the refund. The deadline to complete refunds will be cut off 30 days from this announcement (Tuesday, September 24, 2019). For any questions or concerns, please contact the Tickets300 box office at 866-300-8300.

One might think that with finding success after 25 years of performing at county fairs and oddball venues, the moral of singer-comedian-celebrity impressionist Terry Fator’s story might be the cliché of: Never give up on your dreams. But, when it comes to Fator’s story of success after 40, that old adage doesn’t quite ring true.

“I actually don’t believe in not giving up,” laughs Fator, 49, who was ranked No. 2 on Forbes’ list of the top-earning comics just behind comic legend Jerry Seinfeld in 2013. “It’s okay to give up because I did. I worked for 25 years playing every fair, small club and kids’ party I could and it just felt like it wasn’t going to happen. I resigned myself to just playing kids parties. That was okay for me. But, I didn’t stop working and doing the thing that I love to do and getting better at it. Once I did that, something finally happened for me.”

That “something” was NBC’s hit competition show, “America’s Got Talent.” After turning down a chance to compete on the first season of the show, his fans wrote the show saying they just had to have Fator on. Producers called Fator and invited him to audition. After seeing, and liking, Season 1 of the show, Fator went for it, and in 2007 the then 42-year-old comedian became the “America’s Got Talent” Season 2 champ, taking home the $1 million prize and title of “Best New Act in America.”

“It was the big break I had worked for my entire life,” he says.

It wasn’t long before Sin City would recognize Fator as the headlining act he was destined to be. In 2007, he signed a $1.5 million deal to perform at the Las Vegas Hilton. The following year Fator signed what has been described as “one of the largest entertainment deals in Las Vegas history” to headline his own show, “Terry Fator: The VOICE of Entertainment,” at The Mirage Hotel & Casino. In 2015, the show celebrated its sixth anniversary at the iconic Strip resort which followed a contract extension that finds Fator calling The Mirage home through 2016.

“I’m grateful that I didn’t find success until my 40s,” admits Fator, who hails from Dallas, Texas. “I’m not sure I could’ve handled success at a younger age. It can screw your brain up. Just look at a lot of today’s young stars. But at 42, you have perspective and you’re more grounded so that when the time comes that all of a sudden millions of people see and like what you do, it doesn’t go to your head too much.”

Fator’s story began long before “America’s Got Talent.” His first taste of entertainment came at age eight when he tried his hand at magic with the help of a hypnosis book. “I unsuccessfully tried to hypnotize my friends, but then in fifth grade I found a book on ventriloquism and that came pretty quickly for me. I was always fascinated with all forms of entertainment, but especially magic and puppets. But other kids in school were doing magic, and I wanted to be original so ventriloquism became my thing,” says Fator, who rounded out his creative endeavors by taking on the lead in many school and church plays as a kid, and later fronted the band Texas the Band from the late ’80s through 2001. He was close to signing a record deal with Warner Bros. until they told him he had to take the ventriloquism out of his band performances. That was a deal-breaker for the entertainer.

As a young kid, Fator would practice talking without moving his lips in the privacy of his closet and while he was working odd jobs, hiding his rehearsals from his unsupportive father. At age 10, he bought a $20 puppet from Sears, but its head and eyes didn’t move, making it hard to really get his act down. His mother took the puppet apart, gave him a whole new body and slapped a wig on his head – Fator was on his way to practicing with a real puppet that he named Josh. He soon graduated to a semi-professional puppet, which he used until age 18, and onto his first real professional puppet that he named Walter T. Airdale, a country singer, who is still a part of his act today. Little by little Walter was joined by an eclectic cast of characters, including Winston, the Impersonating Turtle; Emma Taylor, the selfie-taking tween with the big voice; Maynard Tompkins, the Elvis Impersonator; Duggie Scott Walker, the annoying neighbor and many others.

After decades of performing, Fator felt at the end of his creative rope. “It was just so discouraging because I felt I had something big to offer that millions would want to see, but I couldn’t find that break. Even five months before “America’s Got Talent,” I did a show in 1,000-seat theater and only one person showed up. I was so down. I thought, ‘Why am I doing this? It’s never gonna happen. I’ll never have millions of people that enjoy my gift.’ But then I thought, ‘Wait a second. I’m lucky that I get to do what I love and I do love this. So what if I always have to play for first graders or kids parties or county fairs? I’m still doing what I love and I’m not going to stop. It’s better than going to work at a real job to just pay the bills,'” says the showbiz journeyman.

Today, Fator impersonates more voices than he can count with the help of more than a dozen characters singing everything from Nat King Cole, Garth Brooks, Roy Orbison, Dean Martin, Elvis, Louis Armstrong, Bruno Mars and many more.

Today, Fator finally has that audience of millions who enjoy his work through his sold-out and award-winning live show, multi-platinum selling DVDs (his debut DVD, “Terry Fator: Las Vegas” charted four times platinum), and numerous memorable television appearances. The industry has certified him a bona fide superstar, as well, with Simon Cowell declaring Fator to be “one of the best entertainers in the world” and The Best of Las Vegas Awards honoring “Terry Fator: The VOICE of Entertainment” with awards for Best Show, Best All-Around Performer, Best Impersonator and Best Overall Show.

“The best thing about all of this is that now my creativity is not shackled by my lack of finances. Now, if I have an idea I can actually do it and do it right,” he says. In 2013, Fator released a country music album “It Starts Tonight” as well as a children’s book Lamu, The Christmas Kitten which is a story of the life of Jesus Christ as told through the eyes of his cat. In 2014, “Terry Fator: Live in Concert,” a DVD showcasing Fator’s 2013 Las Vegas show, was released nationwide and simultaneously an updated version of the Las Vegas stage show was launched.

What’s next? “I just always want to entertain. That’s it. I never had fans before and now that I do I just want to keep them smiling and laughing,” he adds.