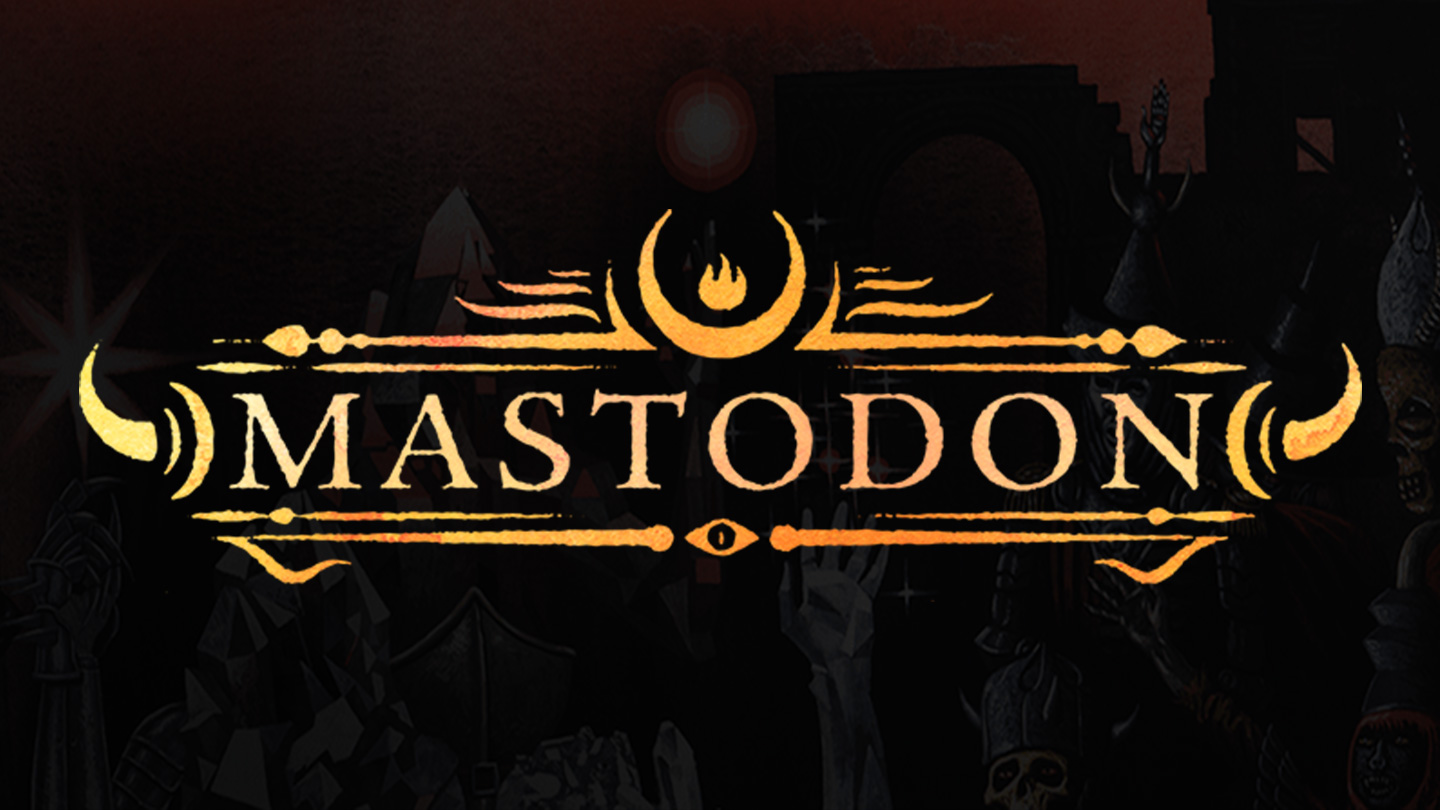 Mastodon regrets to inform fans that due to a critical situation of a member of the Mastodon family, their upcoming tour with Dinosaur Jr. will be cancelled.

Mastodon would like to extend their sincerest thanks to their loyal fans as well as the fans of Dinosaur Jr. for their support and understanding at this time. The band hopes to make up these shows at a future time, but as of now, no plans for rescheduling have been set.

All patrons who purchased tickets via credit or debit cards will receive automatic refunds. Any cash purchases should be returned to point of purchase with hard ticket in hand. Refund is full purchase price including fees and sales tax.

Get tickets by clicking the link above, or in person at Electric Fetus, Super One (West Duluth, Superior, Cloquet, or Pike Lake) or by calling (866) 300-8300.

Every living creature must face the will and judgment of time.

Ancient Greeks personified time in the form of the titan Kronos, father of Zeus, and Egyptians celebrated Heh as an abstraction of endless years. Famously, William Shakespeare lamented humanity’s immutable fate as “time’s subjects” in Henry IV. GRAMMY® Award-winning hard rock band Mastodon ponders the nature of time on their eighth full-length album, Emperor of Sand, on Reprise Bros. Records. Threading together the myth of a man sentenced to death in a majestically malevolent desert, the Atlanta, GA quartet—Troy Sanders (bass/vocals), Brent Hinds (guitar/vocals), Bill Kelliher (guitars) and Brann Dailor (drums/vocals), and conjure the grains of a musical and lyrical odyssey slipping quickly through a cosmic hourglass.

“Emperor of Sand is like the grim reaper,” admits Dailor. “Sand represents time. If you or anyone you know has ever received a terminal diagnosis, the first thought is about time. Invariably, you ask, ‘How much time is left?’”

Since forming back in 2000, Mastodon have certainly made the most of their time. Most recently, their 2014 seventh offering Once More ‘Round The Sun bowed at #6 on the Billboard Top 200, marking their highest chart entry to date and second consecutive Top 10 debut following 2011’s The Hunter. Casting a shadow over pop culture, they received “Best Hard Rock/Metal Performance” GRAMMY® Award nominations in 2007, 2014, 2015, and won in 2018. Their music blasted through the Academy® Award-winning comedy The Big Short, animated blockbuster Monsters University, and sci-fi western Jonah Hex starring Josh Brolin—for which the group composed the score. After contributing “White Walker” to HBO’s Catch The Throne, Vol.2 mixtape, Dailor, Hinds, and Kelliher appeared as “Wildlings” in a popular episode of Game of Thrones Season 5.

Not only did they earn the appreciation of Time, Rolling Stone, Stereogum, Billboard, and more, but they also turned many peers into fans, including Metallica, Pearl Jam, Tool, Queens of the Stone Age, CeeLo Green, and Feist, to name a few. Performing everywhere from Coachella and Bonnaroo to Download and Sonisphere and nearly every major festival, they’ve headlined legendary venues such as Red Rocks and sold out shows around the globe. Emperor of Sand offers the next conceptual and instrumental evolution for these musicians.

“Since it regards enduring insurmountable odds, it’s a continuation of the Mastodon catalog,” explains Sanders. “That started in 2002 on Remission. Two years later, Leviathan was about hunting a metaphoric whale that could solve all of your problems, or it could kill you in the hunt. We took a journey up Blood Mountain and vaulted all of the hurdles that needed to be cleared for survival. Crack The Skye was its own deep and twisted concept. The Hunter was loosely based on dealing with death. Once More ‘Round the Sun was about being given an opportunity to do this one more time, one more trip, one more tour cycle, one more year, and one more birthday. Now, we’re reflecting on mortality. To that end, it ties into our entire discography. It’s 17 years in the making, but it’s also a direct reaction to the last two years. We tend to draw inspiration from very real things in our lives.”

A trying, turbulent, and tragic turn of events transpired as Dailor and Kelliher began writing music in the latter’s brand new basement studio. The guitarist received news of his mother’s brain cancer diagnosis during May 2016. He spent the next six months making regular trips to Rochester, NY before her untimely passing in September.

“When my mom became ill, it was really heavy,” Kelliher sighs. “She’s the person you know best. She’s the person who brought you into the world, nurtured you, and cared for you. No matter how old I was, my mom never let go of worrying about me, checking in on me, and trying to give me advice on life. It’s a sad and terrible thing when you have to watch your mother die. It’s something I think about every single day.”

Dailor recalls, “Writing was like a distraction to give Bill a release. There’s nothing you can do, but you can say, ‘Let’s go in the basement and see if there any riffs.’”

“One of the things I appreciate about my bandmates is we channel our current energy— although it may be dark—through the art we call Mastodon,” adds Sanders.

As jamming ramped up, a narrative took shape for Emperor of Sand. Dailor details it: “A Sultan in the desert hands down a death sentence to this guy. He’s running from that. He gets lost, and the sun is zapping all of his energy akin to radiation. So, he’s trying to telepathically communicate with these African and Native American tribes to get rain to pour down and kill it.”

In order to capture the vision on tape, the guys enlisted producer Brendan O’Brien (Pearl Jam, Neil Young, Red Hot Chili Peppers, etc.) with whom they worked on 2009’s seminal Crack The Skye. For several weeks, the band recorded with O’Brien at The Quarry Recording Studio in Kennesaw, GA.

“Brendan is a charismatic and funny guy,” smiles Hinds. “He knows us so well, and it felt like like we picked up right where we left off. He adds all of these bells, whistles, and perks outside of being an awesome musician in his own right. Everything came together lickety-split.”

“I feel like we had an even better time with him,” says Kelliher. “We trust his opinion, and he’s super hands-on. He was always in the room with us, and he knows what we’re going for.”

Emperor of Sand commences with the unpredictable swell of “Sultan’s Curse.” A storm of muscular guitar riffs and a thunderous bellow rages amidst a deluge of acidic percussion. Opening the storyline, our hallucinating protagonist, “believes he’s being bathed by the Sultan’s daughters, but he’s being carried to his assassination by the Sultan’s men,” as Dailor says.

Next up, “Show Yourself” alternates between Dailor’s hypnotic croon and Sanders’ overpowering roar, trudging into one of Mastodon’s most chantable refrains.

“It’s about revealing your inner strength to power through a bad situation,” Dailor goes on.

“It’s outside the box,” Hinds comments. “That’s exciting for us to do things people don’t expect.”

Whether it’s the thought-provoking elegy of “Roots Remain” punctuated by a searing Hinds solo or the hammering “Andromeda,” which boasts a primal scream by Brutal Truth’s Kevin Sharp, the music ebbs and flows inside of an emotional hurricane awash in cinematic keys and mellotron, fret fireworks, and the push-and-pull of three distinct voices. On the latter half of the record, the venomous and vital “Scorpion Breath” upholds a tradition of cameos by longtime friend Scott Kelly of Neurosis. Conclusion “Jaguar God” hinges on a delicate acoustic intro by Hinds before climaxing in a head-spinning last gasp of crunching distortion and a polyrhythmic percussive flood.

In the end, Emperor of Sand siphons raw emotion through the framework of an immersive story and intricate musicianship, digging to the core of what defines Mastodon and all timeless rock ‘n’ roll.

“When people hear it, I want them to experience the spectrum of emotions that we put into it,” Dailor leaves off. “We’ve been through everything together. We still have the same four guys after 17 years. It’s been the wildest of rides. I love it, and I love those dudes.”

“If our songs can touch someone in a positive manner, that’s the magic of what music can do,” concludes Sanders. “I know for a fact that music is the universal language. I hope someone will find it touching. As far as the fan base we’ve built up over the years, I hope they’ll give it a listen and stay on this ride with us. It’s a marriage! At the end of the day, we’re four guys in a rock band. We navigate through difficult circumstances musically and in life as brothers. It’s the next chapter of our adventure.”