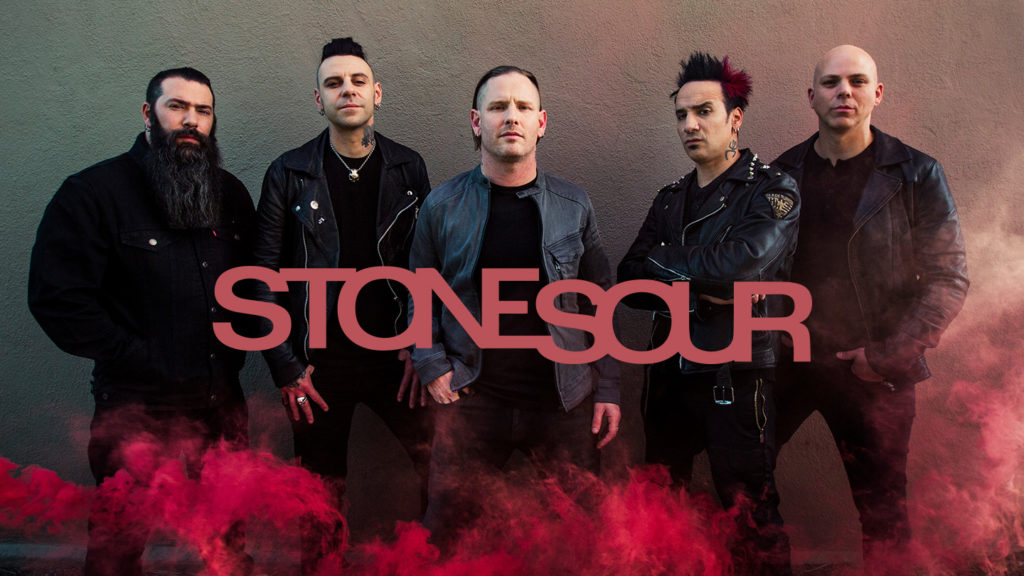 Stone Sour, the gold-selling Iowa hard rock outfit, has sold over four million albums worldwide over the course of five full-length releases. Stone Sour unleashed their eponymous debut album in 2002 and was immediately confirmed as one of the most popular and significant hard rock outfits of the 21st century. “STONE SOUR” earned RIAA gold certification while singles “Get Inside” and “Inhale” each received GRAMMY® Award nominations for “Best Metal Performance.

“COME WHAT(EVER) MAY” followed in 2006 and proved an even greater accomplishment with a top 5 debut on the SoundScan/Billboard 200 and a #1 entry onto Billboard’s “Rock Albums” chart. The acclaimed album spawned still another GRAMMY®-nominated single in “30/30-150” on its own way to RIAA gold certification and “Through Glass,” which spent seven weeks atop Billboard’s “Hot Mainstream Rock Tracks” while also reaching #2 on “Alternative Songs” and the top 40 on the overall “Hot 100.”

Stone Sour’s most recent all-original releases, the monumental “HOUSE OF GOLD & BONES – PART 1” and “HOUSE OF GOLD & BONES – PART 2,” both made top 10 debuts on the SoundScan/Billboard 200 upon their 2012 and 2013 arrivals – the band’s third and fourth consecutive top 10 chart entries. The two-part concept album yielded a string of multi-format rock radio hits, including the top 5 favorites “Absolute Zero,” “Do Me A Favor,” and “Tired,” the latter of which ascended to #1 at Mainstream Rock outlets nationwide.

2015 saw the arrival of “STRAIGHT OUTTA BURBANK,” an unprecedented EP in which Stone Sour took on five immortal songs originally performed by such iconic artists as Bad Brains, Iron Maiden, The Rolling Stones, Mötley Crüe, and Slayer. More, recently, Stone Sour celebrated the 10th anniversary of their classic second album, “COME WHAT(EVER) MAY,” with an extraordinary new Deluxe Edition marking the collection’s first ever vinyl release. Remastered and appended by an array of bonus material, the Deluxe Edition, featuresan array of rare tracks, B-sides, and more, including never-before-heard versions of “Through Glass,” “Zzyzx Rd.,” and “Cardiff,” as well as an electrifying acoustic cover of The Rolling Stones’ “Wild Horses.”