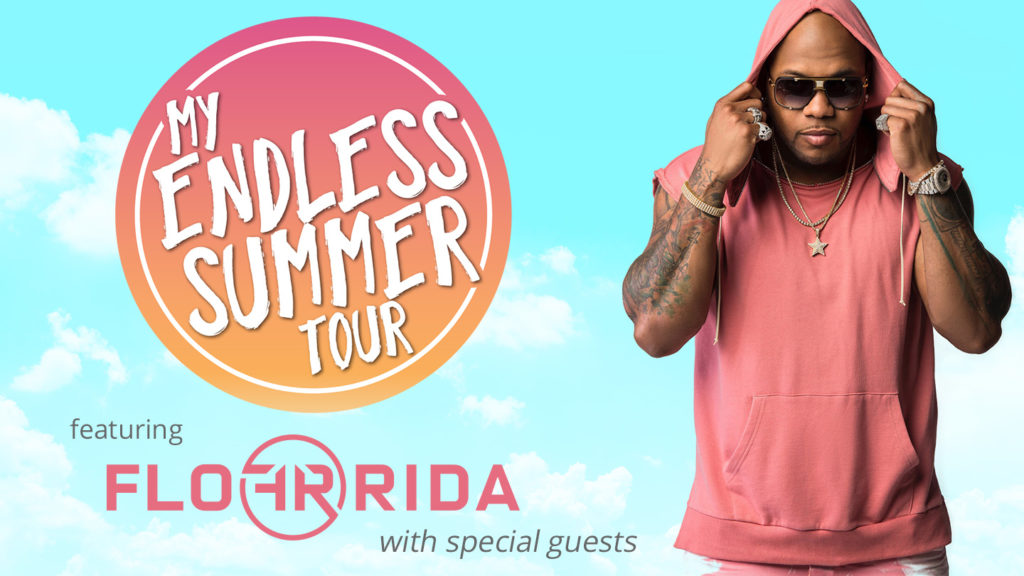 Due to unforeseen circumstances, the My Endless Summer Tour 2017 Featuring Flo Rida has been canceled.

Due to unforeseen circumstances, the My Endless Summer Tour 2017 Featuring Flo Rida has been canceled.

Flo Rida: Born Tramar Dillard on September 17, 1979, Flo Rida was raised by a single mother in Miami’s rough neighborhood of Carol City, Florida. Music helped Flo Rida stay on the straight path. His father was a talented musician who encouraged his son to express himself through music. Growing up, Flo Rida was exposed to all kinds of music, thanks in large part to his sisters, some of whom formed a local gospel group. When he was a teenager, Flo Rida found local success rapping with a group called the Groundhoggz. At 18, he became the hype man for Fresh Kid Ice from 2 Live Crew. Eventually, Flo Rida caught the attention of DeVante Swing, formerly of famed R&B group Jodeci and spent a few years in Los Angeles working with him. Unable to land a record deal, Flo Rida returned home to Miami and in late 2006 hooked up with Poe Boy Entertainment and its CEO, Elric “E-Class” Prince.

In December 20, 2006 Flo Ridainked a deal with Atlantic Records and in 2009 started his own management company, Strong Arm, with longtime friend and manager, Lee “ Freezy” Prince. With the success of his management company Flo Rida and Lee “Freezy” Prince launched their own record label, IMG, in June 2011. With his musical success Flo Rida got back to his roots of giving back and started “Big Dreams For Kids” a nonprofit foundation that is committed to inspiring future leaders.

Timeflies: When you break it down, music should be about having a good time. New York’s alternatively minded “electro hip-pop dub-something” pair Timeflies — Rob “Rez” Resnick [producer] and Cal Shapiro [vocals] — embrace that ethos with their third full-length album, the appropriately titled ‘Just For Fun’ [Forty8Fifty/Island Records].

“The title speaks to the approach,” affirms Cal. “When we first started Timeflies in 2011, it was back in our college dorm room. We didn’t even know if anyone would hear what we were doing. We were writing songs just for fun. That’s the vibe of this body of work.”

Rez agrees, “The music industry is so intense that it’s easy to overthink every little detail and lose sight of the real goal. We wanted to get back to simply kicking it and writing songs.”

Not surprisingly, this method always yields the best results, too. A boundless approach catapulted Timeflies from that makeshift dormitory beat lab to sold out shows everywhere. It started with the weekly tradition “Timeflies Tuesday” on YouTube where they’d showcase new music. Now, the weekly program has grown into a phenomenon exceeding 125 million views to date.

Following indie breakout 2011’s ‘The Scotch Tape,’ their 2014 first major label offering, ‘After Hours,’ debuted at #8 on the Billboard Top 200, went #1 on iTunes Top Pop Albums chart, and yielded the hit “All The Way” which soared to #2 on Billboard’s Top Digital Songs chart and has earned over 35 million Spotify streams. They’ve landed high-profile syncs for films like “About Last Night” and from the MLB, NBC, Red Bull, “American Idol,” and more. Vanity Fair dubbed them “Musical Masterminds,” and the duo has hit the stage at “Good Morning America” and on “Jimmy Kimmel LIVE!” Their last national headline tour saw every single date sell out. It was on that tour where they wrote the bulk of ‘Just For Fun.’

“We brought this 65lb recording rig on the road,” recalls Cal. “It had everything we needed to construct the bare bones of the album. It literally took shape over the course of those two months. We would record ideas in the dressing room or at the hotel after the shows.” They took those ideas back to VibeLand Studios in New York during early 2015. The studio’s atmosphere of, as Rez puts it, “beanbag chairs, ukuleles everywhere, and Edison bulbs” appropriately augmented their approach. The “vibe” encouraged their signature free-flowing alchemy of rap, pop, and electronic music, catalyzing an even more intoxicating and infectious concoction as a result. “Beyond genres, we make feel-good music,” Rez continues. “It hopefully carries a lot of emotion and makes for a deep listening experience. From a production standpoint, it’s big, while staying clean. Every song is almost like a remix in that we’ll get an idea recorded, completely strip it, and build it up again.”

Even with most of the record cut at VibeLand, a trip to Los Angeles offered the perfect backdrop for the first single “Worse Things Than Love” [featuring Natalie La Rose]. Driven by old-school percussion, symphonic synths, a swaggering acoustic guitar, and Cal’s inimitable flow, the track struts between Motown spunk and modern pop shine.

“It started when we walked in the room,” reveals Cal. “I started singing, and it felt right. So many people try to overcomplicate and analyze love and relationships, but there are worse things than love. It’s supposed to be gratifying!” “Everyone was in a great mood, and you can hear that in the track,” adds Rez.

Along the way, Timeflies has drawn the unending support of countless fans affectionately known as the “Flyhards,” and ‘Just For Fun’ will undoubtedly fortify that link. “The fans helped build this,” says Rez. “We always bring it back to them. That’s a huge reason why we approached the album the way we did. It was organic and natural which is what we loved in the first place.” Cal followed, “This is us going back to making music like nobody is listening. We had fun, and we hope everyone else does, too.”